Will carry on protesting till CAA goes, says Mamata Banerjee

New Delhi: Hitting out at the BJP government at the Centre, West Bengal Chief Minister Mamata Banerjee has said she will keep protesting, albeit peacefully, until the Citizenship Amendment Act is revoked. She said the BJP was ‘playing with fire’.

Speaking at a protest rally in Kolkata, the Trinamool Congress chief asked students to carry on with their protests. She also told them that she will always be with them. ‘Do not fear anybody. I warn the BJP not to play with fire,’ the chief minister said. The Trinamool Congress chief, who led a protest march from Rajabazar to Mullick Bazar in central Kolkata, alleged that students speaking against the CAA are being threatened by the BJP.

‘We express our solidarity with the students of Jamia Millia, IIT Kanpur and other universities who are protesting against the CAA and the NRC,’ she said. They have been also asked to vacate hostel rooms, she said. Thursday’s rally by Banerjee was the fifth by her in 11 days in and around Kolkata against the CAA. 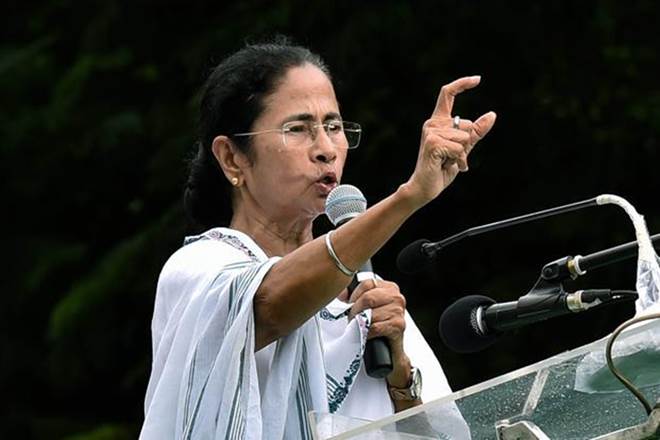 Mamata Banerjee warning the BJP government at the Centre that her protest will go on until the CAA is withdrawn. Photo credit: PTI

West Bengal Chief Minister Mamata Banerjee hit out at Prime Minister Narendra Modi saying ‘If you chase out everybody, who will stay here?’ She said, ‘The BJP paints other parties in black and portrays itself in white’.

Her party, the Trinamool Congress, she said, will fight for all the communities. ‘This is Hindustan. We will not allow any party to snatch away our rights. If needed we will lay down our lives to protect the movement against CAA,’ she said.

Mamata Banerjee said the protesting students are adults and voters. ‘So if they stage any protest, where is the harm in it? They have a role to play,’ she said and suggested they use social media to unite people. She said a TMC delegation will be sent to Karnataka to meet families of victims allegedly killed in police firing there. ‘We have decided to hand over cheques to the families of the victims. They will be handed over by the TMC trade union,’ she said.

Referring to the violence in Lucknow, she said the TMC had sent four representatives to Lucknow but they were not allowed to step out of the airport. ‘We do not do politics of hatred like the BJP, but politics of love,’ she said. ‘It is a ploy of the BJP to defame any peaceful movement. So I request everyone to keep a strict vigil on any move to divide the people of the country. We will not allow anyone to split this movement of the people. The BJP is trying to snatch away our rights, particularly our mothers and sisters,’ she said.

Taking a dig at Modi for his comment that rioteers against CAA can be identified by their clothes, Mamata Banerjee, ‘BJP will use similar clothes to derail the ongoing movement against the CAA.’ She also said, ‘Give roti, kapda and makaan to the people of the country. You (BJP) have failed to do so but are busy identifying infiltrators. Give people jobs.’