Mamata’s Fifth March in Support of Protestors against CAA Law

Culcutta: Mamata Banerjee appealed to the student of the state to keep progressing with their protests against the CAA while speaking on Thursday. Mamata also warned the BJP government not to use force on those protesting against the new law on citizenship. 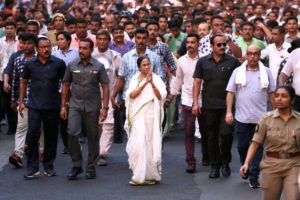 Mamata Banerjee said, “In the BJP-ruled states, particularly Uttar Pradesh, brute force is being used to curb the movement. But I would like to tell the BJP: don’t try to muzzle the movement through force. If anybody tries to terrorize people and use brute force, then the people of the country, of Bengal, will not support that.”

.@MamataOfficial told the students that she will always be by their side. “Do not fear anybody. I warn the BJP not to play with fire,” she said.https://t.co/kwf7HJ4AQx

Before carrying the march against the CAA law, Mamta Banerjee expressed herself at Rajabazar in north Kolkata and requested not to stop protesting to the people of the state.

Mamata Banerjee outlined her intention by quoting that the agitation initiated for protecting people’s rights will go on and those involved in the protest won’t even fear their life. She also mentioned that the movement won’t stop until the law is scrapped completely.

During the march, Mamta Banerjee tried to convince protestors of her support and exclaimed that she would provide extended support to all those students fighting against the CAA.

Mamata quoted, “The students are being threatened that their careers will be finished. They should not bow to these threats and continue their protests,” she said amid blowing of conch shells and beating of kasor, and incessant slogans of “No CAB, No NRC”.

Trinamool is still including ”CAB” in almost all of its posters and slogans even after the Citizenship Amendment Bill became an Act.

Before the march came to a halt at Mullickbazar, it covered a large area of the state including Narkeldanga, Sealdah station, Acharajya Jagadish Chandra Bose Road, and Nonapukur. To witness the march, a huge number of people from the state of West Bengal lined both sides of the streets in order to welcome Mamata Banerjee.

Including this march, Banerjee has concluded a total of five marches in the state against the CAA.

As per the CAA law, those non-Muslims who crossed the border before December 31, 2014, would be welcomes as Indian nationals to India. The non-Muslim religion including Hindus, Christians, Sikhs, Parsis, Jains, and Buddhists who fled persecution in Pakistan, Afghanistan, and Bangladesh and took refugee in camps would be welcomed inside India.

The law further stated that these immigrants won’t be considered illegal passers and would be provided Indian citizenship. However, the country seems not to completely agree to the decision and the disappointment is being shown with protests and marches.

The legislation has resulted in fierce protests and has been witnessed in most parts of the country. By now, there have been over 20 deaths recorded of those who were protesting against the law and who participated in the ongoing agitation.

In West Bengal, the condition is worse. With many public places being torched and vandalized by protestors including trains, buses and railways stations. Roads have been blockaded by the protesters. Hence, making the situation getting difficult to control.