What Caused BJP to Lose to the Opposition in Jharkhand?

Jharkhand: After the latest assembly elections in Jharkhand, the Jharkhand Mukti Morcha (JMM) led alliance has successfully won by a clear majority after beating the current BJP government in the state. As per the reports, the win has been recorded as one of the best performances by JMM while helping the party to emerge as the single largest party with a total of 29 MLAs in its name. On the other hand, BJP lost its power to JMM in Jharkhand as well as no longer can be called the largest single party with securing only 27 MLAs instead of 37 MLAs in 2014.

The defeat can be concluded as a result of three major factors. While looking at the trends, one can very well outline the low performance of the BJP party in the local elections compared to national elections. And, like other states where BJP could not instill its trust in people and lose to the opposition parties, Jharkhand happens to be one more addition to that list. The anti-incumbency against the state government, which is obvious after chief minister Raghubar Das lost himself in the elections was another reason. However, the major of all the reasons was the opposition’s success in achieving a massive consolidation of Scheduled Tribe (ST) voters. This too without hurting the non-ST population. On the other hand, BJP plans for sticking to the non-ST chief minister in a state with 26% ST population, did not go as planned.

Anti-incumbency Within the People of the state

The reason that BJP faced worse defeat in Jharkhand than Maharashtra and Haryana is easier to address after the defeat of Raghubar Das, the current BJP chief minister of the state. Raghubar lost his Jamshedpur East seat to Saryu Rai. Saryu Rai is a BJP veteran who could not get a ticket from his own party and was expelled. Not just that, another important leader, Laxman Giluwa, the BJP president, too lost his Chakradharpur seat.

The massive defeat may be surprising, but the spur of anti-incumbency against the BJP government wasn’t all shocking. And, the two major leaders of the party losing their seats to the opposition makes that even more evident.

The people of the state had a poorer impression of the prevailing party irrespective of their liking of the central party which was outlined in the CSDS-Lokniti post-poll survey during the 2019 Lok Sabha. On top of that, bringing Raghubar Das as the choice for chief minister’s face, while antagonizing its own leaders did make the condition worse. After which the alliance with the Jharkhand Students Union also broke making the party even more vulnerable. 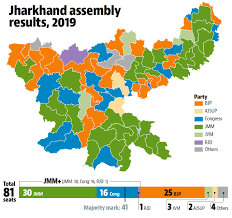 In the last assembly elections, BJP chose Raghubar Das as the chief minister of Jharkhand in 2014. At that time, Raghubar became the first non-ST candidate to hold that post. However, this time, the BJP has also coped severely in general and SC reserved seats as compared to the previous assembly elections in 2014. On the contrary, the JMM, Congress has been able to win 25 out of 28 ST seats.