Jharkhand: The surprising results from the Jharkhand assembly election have left many in awe. BJP which was very much confident about its consecutive victory in Jharkhand this time found it shocking when the results were made public. The BJP government that was planning to retain its power in the state is no more the single largest party in Jharkhand as the JMM progressed to take that tag too from BJP.

During the last assembly elections, BJP scored 37 seats while its closest ally Jharkhand Student Union abbreviated as AJSU bagged 3 seats. In the beginning, the two parties contested separately and later, could not decide upon the sharing of seats. In the same election, the JMM got 19 seats and Congress won 6. However, at that time, RJD failed to even open their account.

Babulal Marandi, the former chief minister who managed to get 8 seats in the last assembly election, may have to be content with 3 this election.

The alliance of Jharkhand Mukti Morcha, RJD and Congress would now be forming government in Jharkhand while replacing the BJP government that was in power from the last five years. Outperforming the BJP government, the alliance has also now would be the single-largest party in the assembly of 81 seats. The party leader Hemant Soren has been elected to claim the power today. Without any complexities, the JMM-Congress alliance gained the majority bar of 41 evolving as the strongest party in the state post-election. 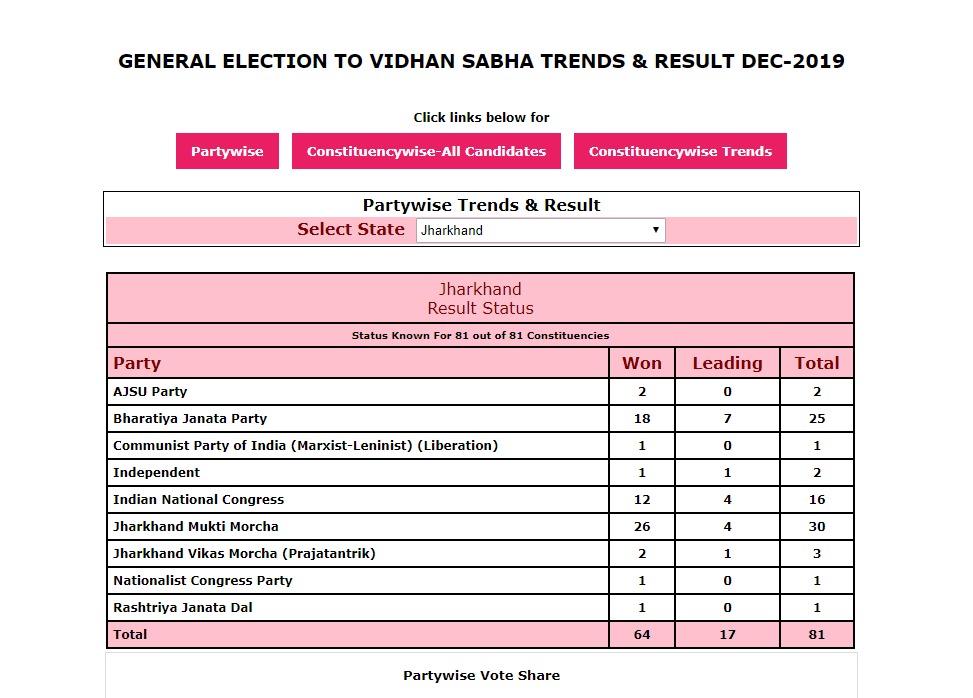 Hemant Soren, the JMM working president and going to be the new CM of the state, exclaimed while addressing the reporters that the state would witness a new chapter in Jharkhand and promised to fulfill people’s expectations.

After winning the election, Hemant Soren thanked the people of Jharkhand for choosing the alliance and helping it bag a clear majority. The party president also said that the alliance would together decide the future course of action.

Following the results, many leaders including the Prime Minister, Narendra Modi congratulated the JMM led alliance for their victory in the assembly election.

Congratulations to @HemantSorenJMM Ji and the JMM-led alliance for the victory in the Jharkhand polls. Best wishes to them in serving the state.

According to his statement, BJP will always remain committed to the development of the state. Thanking the party workers for their determined and great efforts towards the assembly polls, Shah applauded for their support irrespective of the results.