New Delhi: As thousands protested at the “Occupy Gateway” event in Mumbai the Central Government has zeroed in on a “Free Kashmir” poster one protester was carrying. The Mumbai Police has taken “serious cognisance” of the poster seen at the Gateway of India on Monday night during protests against Sunday’s violence at Delhi’s Jawaharlal Nehru University.

The poster, held by a young woman who later identified herself as Mehak Mirza Prabhu, was among several held by protesters who had gathered at the monument. Following this, a political war broke out among Central and Maharashtra political leaders. 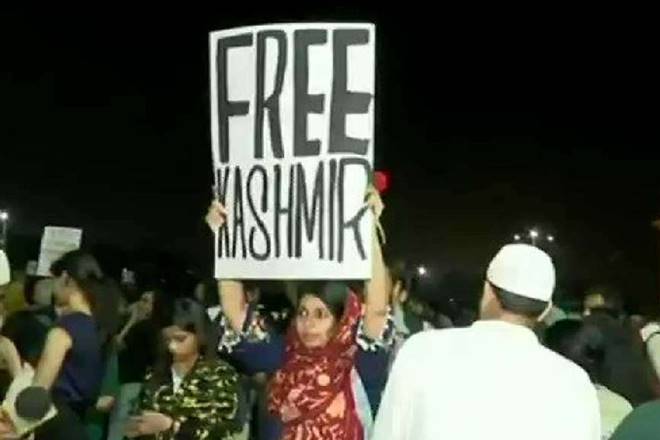 Mehak Mirza Prabhu, the protester who has upset the Mumbai Police with this poster. Photo credit: Financial Express

Union minister Prakash Javadekar on Tuesday said a few selective “anarchists” were raising such slogans while the entire country supported the revocation of Article 370 in Jammu and Kashmir. Speaking to reporters, Javadekar said Kashmir is an inseparable part of India and said that peace has been prevailing and the region is making progress since Article 370 of the Constitution was repealed. “The entire country is supporting the move… few selective anarchists are raising such slogans. Nobody even inside Kashmir raised such slogans. Now if someone outside the region gives such slogan, that makes no sense,” he said.

Maharashtra minister Jayant Patil and former chief minister Devendra Fadnavis engaged in a Twitter spat over the ‘Free Kashmir’ poster. Tagging a picture of the poster to his Twitter account,
Fadnavis asked what exactly was the protest for and if Chief Minister Uddhav Thackeray will tolerate this “anti-India campaign” right under his nose. “Protest is for what exactly? Why slogans of “Free Kashmir”? How can we tolerate such separatist elements in Mumbai?

Protest is for what exactly?
Why slogans of “Free Kashmir”?
How can we tolerate such separatist elements in Mumbai?
‘Free Kashmir’ slogans by Azadi gang at 2km from CMO?
Uddhav ji are you going to tolerate this Free Kashmir Anti India campaign right under your nose???@OfficeofUT https://t.co/zkWRjxuTqA

Devendraji It’s ‘free Kashmir’ from all discriminations, bans on cellular networks and central control. I can’t believe that responsible leader like you trying to confuse people by decoding words in such a hatred way. Is it losing power or losing self control? #JNUViolence https://t.co/wr3KPnWr5n

Meanwhile, talking about the girl who carried the poster, Maharashtra Minister and Chief Minister’s son Aaditya Thackeray said, “We need to see her intent. Was it to remove the Internet blockade in Kashmir? If it was about freeing Kashmir from India, then it is wrong. Obviously everyone is condemning that. Even the other protesters were not supporting that. Students who voice their opinions should not be handled brutally.”

Hundreds of people, including students, women and senior citizens had assembled at the Gateway of India from Sunday midnight and demanded action against the culprits and called for Union Home Minister Amit Shah’s resignation. Protesters were evicted from Gateway of India in south Mumbai on Tuesday morning as roads were getting blocked and tourists and common people were facing problems, a police official said. Police had appealed to protesters to shift but they didn’t listen, so they were “relocated” to Azad Maidan near the Chhatrapati Shivaji Maharaj Terminus, the official said. People called off their protest soon after.

Violence broke out at JNU on Sunday night as masked men armed with sticks and rods attacked students and teachers and damaged property on the campus, prompting the administration to call in the police that conducted a flag march.

At least 34 people, including JNU Students’ Union president Aishe Ghosh, were injured as chaos reigned on the campus for nearly two hours.