West Bengal: “I came here to meet the prime minister and requested him to clear our dues.” Addressing the press after her meeting with the prime minister, Mamta Banerjee said, ”The Central government owes the state around Rs 38,000 crore. I also told him that we are against CAA, NPR [National Population Register] and NRC. I asked him that the Centre should rethink these issues and withdraw CAA.” 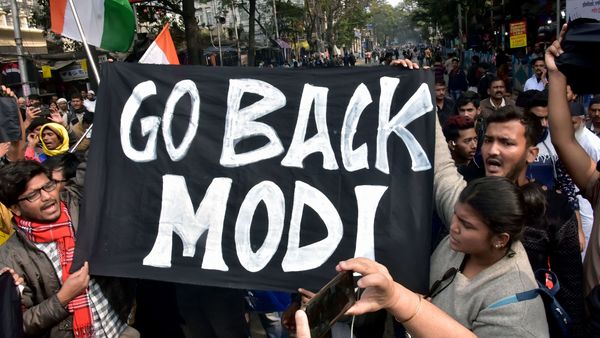 Mamta Banerjee has been in charge of organizing protest marches against the much-discussed and debated Citizenship Amendment Act. For the same reason when the prime minister planned his visit, the opposition of state and center have been a Chai pe Charcha all over Bengal and then India. Interestingly while people’s eyes were delighted to see how Modi administration’s initial plan i.e. to barricade the entire route from the airport to governor’s residence failed and how he had to take a helicopter for his 16-kilometer long travel. The leading left in the state, the Communist Party of India (Marxist) and its allies did not leave any stone unturned in calling out,” Oust Trinamool Congress to Save Bengal, Oust BJP to Save India.”

Mamta had already announced how she won’t be a part of the meeting that is organized by Sonia Gandhi against NRC and CAA, today. Pointing out Narendra Modi and holding his government responsible for spreading violence, Mamta went on a day before Swami Vivekanand’s birthday. She quoted, ”Tomorrow it is Swami Vivekanand’s birthday. Some fly down from Delhi to glorify themselves over his name but we work on his ideals all through the year! Citizenship is the right of every citizen. The anti-CAA movement will continue. Our agitation here is peaceful but those by BJP are violent.”

Even the statue Narendra Modi unveiled at Old currency building is telling him #GoBackModi.

Our people powered campaign forced him to take a helicopter to travel 16 kms & later he took a boat on river Hooghly to visit the Ramakrishna Mission in Belur. #GoBackModiFromBengal. pic.twitter.com/Gbdmd7u21D

This meet of the state and center government’s leading politicians comes two months before civic elections in West Bengal. When seen from the point of view of the election, Mamta Banerjee’s decision to skip meeting with the opposition party and agreeing to meet Modi at Raj Bhavan starts to make sense. Mamta did not go receive Mr. Modi at the airport, stiffness on both leader’s face was very visible on the picture that went viral on social media after their meet at Raj Bhavan. A group that asked Mamta, ”would you allow Modi to step into Kolkata?” was silenced by the reply from Mamat in Bengali, ”Tomader ar amader lokkho aki. Tomader andolon ar amader andolon aki andolon.” Meaning: Our goals are the same. Your protest and our protest are the same.

Whilst flags that said, ”Go back Modi” were more visible, there were also flags put up by the left and the allies stating, ”Go back Mamta. And,” Chi-Chi- Didi!”