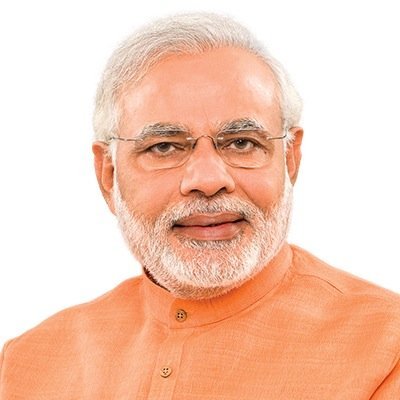 4.0/ 5 5
Ratings Submit Review
Facebook Feeds
This message is only visible to admins.
Problem displaying Facebook posts. Backup cache in use.
PPCA Error: Due to Facebook API changes it is no longer possible to display a feed from a Facebook Page you are not an admin of. The Facebook feed below is not using a valid Access Token for this Facebook page and so has stopped updating.
Twitter Feeds

Narendra Damodardas Modi is an Indian politician serving as the 14th and current Prime Minister of India since 2014. He was the Chief Minister of Gujarat from 2001 to 2014 and is the Member of Parliament from Varanasi.

Who is Narendra Modi?
Narendra Modi is BJP's PM from Varanasi. He was born in Vadnagar, Mehsana, Gujarat, India and currently lives in 7, Lok Kalyan Marg, New Delhi, India. Regarding his education, he is a Post Graduate and is into Author, Public Life & Political Activity.
What is the net worth of Narendra Modi?
Narendra Modi has assets worth Rs 25,136,119 (Two crore fifty one lakh thirty six thousand one hundred & nineteen Rupees) and financial liability of Rs 0 ( Rupees).
Is there any criminal case registered against Narendra Modi?
Yes, we have found 1 criminal cases registered against Narendra Modi as of 2019. There are only few leaders in India who does not have criminal offences or cases registered against them. Choose your neta wisely and vote for nation's bright future!
How to contact Narendra Modi?
You can contact him on 91-11-23012312 or can email him on [email protected]. The accuracy of phone number and email details are not verified by ourneta.com.
About Neta
Assets & Liabilities
Details of Criminal Cases
IPC section 302, 120B, 149, 307, 323, 324, 325, 326, 332, 395, 397 and 436
in February 2011, the trial court convicted 31 people and acquitted 63 others, saying the incident was a planned conspiracy. The convictions were based on the murder and conspiracy provisions of Sections 302 and 120B of the Indian Penal Code respectively and under Sections 149, 307, 323, 324, 325, 326, 332, 395, 397, and 436 of the Code and some sections of the Railway Act and Police Act.

The death penalty was awarded to 11 convicts; those believed to have been present at a meeting held the night before the incident where the conspiracy was formed, and those who, according to the court, had actually entered the coach and poured petrol before setting it afire. Twenty others were sentenced to life imprisonment.

Modi ji one of the Greatest Leader in the World.

Because Of Modi ji India Has make a Great Impression in the world. My vote always to Modi ji

The worst ever primeminister india had seen….in the nearest future it will be the worlds

Modi is one of the best leader in the world!

Truly, an inspiration to the Indian. Sabka sath, Sabka Vikas!

Your request has been submitted successfully.