Hundreds gather at Jama Masjid to protest CAA, Congress & BJP carry on with war of words

New Delhi: Despite the biting cold in the national capital, hundreds gathered today at the iconic Jama Masjid to protest the Citizenship Amendment Act. 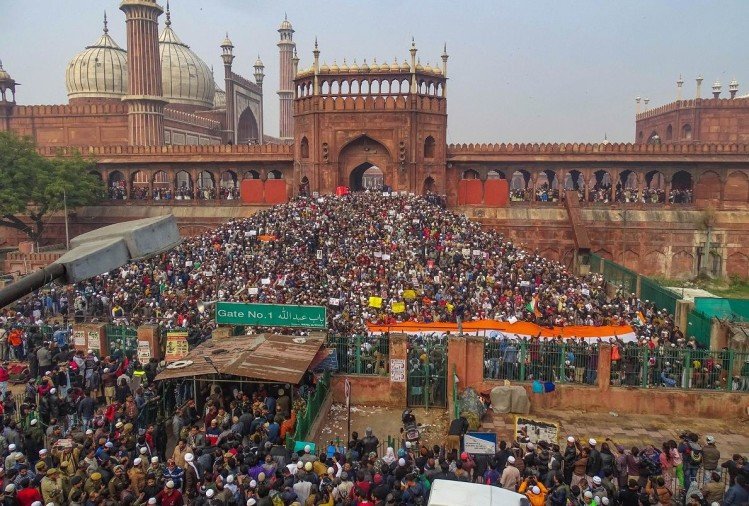 Local Congress leader Alka Lamba and former Delhi MLA Shoaib Iqbal were among those who joined the protests. Alka Lamba said, ‘It is very essential to raise the voice of democracy for the country and for the Constitution. A central government cannot become dictatorial and impose it agenda on people,’ she said.

The protesters, many of whom gathered after offering Friday prayers at the mosque, raised slogans against the new legislation and the proposed National Register of Citizens. The protesters were carrying placards that read ‘Save the Constitution, don’t divide India’.

Meanwhile the BJP slammed Rahul Gandhi for his claim that the National Population Register is a ‘tax’ on the poor and said he is the ‘liar of the year’ for his comments which have embarrassed his party. Senior BJP leader and Union minister Prakash Javadekar accused the Congress of trying to fan instability in the country but asserted that people are with the government on the new citizenship law and NPR.
The NPR does not involve any monetary transaction and its data is used to identify the poor so that government welfare schemes could reach the targeted people, he said.

‘When Rahul Gandhi was Congress president, he would say anything and speak lies all the time. Now he is no longer president but continues to speak lies. If there were a category of the liar of the year, he would be its recipient. His comments used to embarrass his family. His lies now embarrass his party and the entire country,’ Javadekar told reporters.

The Congress hit back at the BJP saying the ruling party resorts to abuse and personal attacks when it has no answers to Rahul Gandhi;s ‘tough questions’ on issues such as the state of the economy and women”s security.

“Rahul Gandhi from every platform asks tough questions. The government of the day is either too arrogant to respond to these questions which the people want answers to or the government has no answers to cover their failures. They hide behind abuse, very low, very petty level of narrative, to make it a personal attack,’ Congress spokesperson Pawan Khera told reporters.

Comparing the National Population Register (NPR) and the National Register of Citizens (NRC) to demonetisation, former Congress president Gandhi said in Chhattisgarh that these exercises are  a ‘tax’ on the poor, who will suffer the same way they did after the note ban in November 2016.

Khera said the Congress has a responsibility as an opposition party to voice the concerns and articulate the questions of unemployed youths of this country with unemployment touching a 45-year-old low. ‘The party has a responsibility to voice the concerns of all those victims of bad economic policies, of the victims of demonetisation and a flawed GST, of small traders, of the women who do not feel safe at all in this country,’ he said.

‘The Congress will continue to ask these uncomfortable questions — why is the youth unemployed, why did you mess up the economy, why are the women of India unsafe. Rahul Gandhi has taught us not to be scared,’ Khera said.