Protests across 10 states over NRC and CAA, historian detained in Bengaluru

New Delhi: Protesters raged across at least 10 states and 15 cities on Thursday defying lockdowns and prohibitory orders that banned the gathering of more than 4 people in one area. They were protesting the National Citizen’s Register (NRC) and the Citizenship Amendment Act (CAA) for the eighth day.

In Delhi, 1,200 protesters, activists and opposition leaders were detained after they defied the ban on large gatherings. There were protests near the Red Fort and Jantar Mantar and leaders like Yogendra Yadav, chief of the Swaraj India party were taken into custody. Moreover, fearing that people would come from Haryana to join the protest, the Police put up barricades on the Delhi-Haryana border and people reported being stuck in traffic jams for over 4 hours. Heavy traffic near the airport also prompted airlines Air India and Indigo to cancel or reschedule flights because crew could not reach in time. Many passengers missed their flights.

In Bengaluru, over 100 people were detained along with historian and well-known Gandhian Ramchandra Guha, who was dragged away by the police in the middle of a television interview.

One person died when protesters clashed with the police in Lucknow, allegedly from a shot fired by the police. Many policemen were also injured in the protests. The streets were littered with small fires and stones used to attack policemen. Protesters torched a state-run bus at Parivartan Chowk, near the district magistrate’s office, and set fire to a police post in Satkhanda area. Another police post was damaged in old Lucknow’s Madeyganj, and police fired tear-gas shells after protesters smashed vehicles parked in the area. 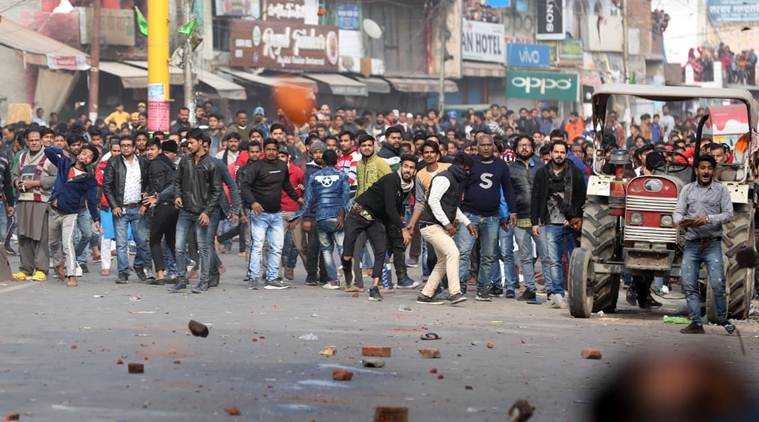 One person died in clashes between police and protesters in Lucknow on Thursday. Photo credit: Indian Express

Chief Minister Yogi Adityanath has warned protesters that his government will take ‘revenge’ on those who have damaged property by confiscating their property and autioning them to cover damages caused to government property. ‘There is no place for violence in democracy. In the name of opposing CAA, Congress, SP and Left parties have pushed the entire country into the fire. All properties of those involved in damaging public assets will be seized and auctioned to compensate for the loss,’ Yogi Adityanath said.

In Mangaluru, two people are in the intensive care unit of a hospital. Here too many policemen have been injured. Protests took place here despite the entire state being under lockdown.

The scale of the protests in Delhi disrupted the entire National Capital Region. Traffic was diverted in various places and over 20 metro stations were shut for many hours.

Voice calls, mobile internet and even SMS were suspended in large parts of Delhi and its neighbouring areas for many hours.

Mumbai saw the largest gathering – over 15,000 – but it was largely peaceful. People gathered at the August Kranti Maidan since afternoon.

In Kolkata, Chief Minister Mamata Banerjee challenged the BJP government to let the United Nations vote on the NRC and the CAA.

Thursday’s restrictions come after protests against the CAA and the NRC escalated, especially after alleged police action at Jamia Millia Islamia, a university in south Delhi.