New Delhi: Union Minister Giriraj Singh on Tuesday said that the Opposition parties and “tukde tukde gang” were trying to tread on Muhammad Ali Jinnah’s path and speaking the language of Pakistan on the Citizenship Amendment Act and the National Register of Citizens.

Giriraj Singh, Minister for Animal Husbandry, Dairying and Fisheries in the Narendra Modi government, alleged that agitations on CAA and NRC were being carried out at the behest of the opponents “to protect the infiltrators”.

“The opposition and tukde tukde gang are not only making efforts to create panic in the country on these issues but also want to bring back the situation of 1947 in the country. They are trying to do things which even Mughals and Britishers could not do,” Singh told reporters.

“They (the opposition) want to create a civil war like situation in the country by spreading confusion on the twin issues in the society,” he said. “The opposition is speaking the language of Pakistan besides treading Jinnah’s path,” the minister said. He asserted that the Congress and AIMIM chief Asaduddin Owaisi were trying to bring back the 1947 situation in the country, but he would not let Jinnah’s ideas and philosophy fructify in the country. The firebrand BJP leader charged parties like Congress, RJD, Communists, AIMIM and the ‘tukde tukde gang’ of creating a division between Hindus and Muslims once again. 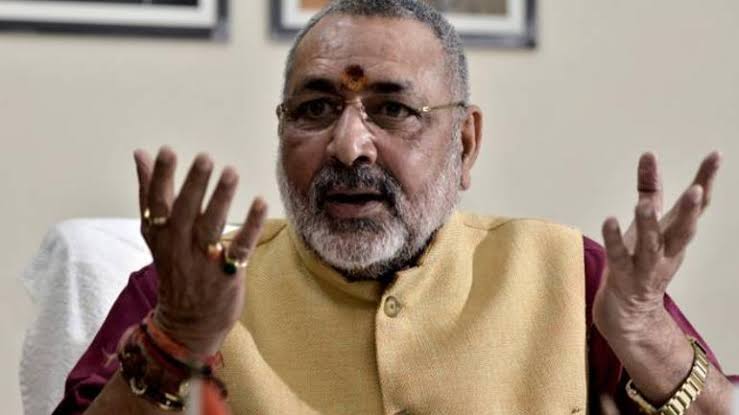 Union minister Giriraj Singh on Monday had backed Meerut SP Akhilesh Narayan Singh, who is at the centre of a row for his “go to Pakistan” comments to some protesters, saying he did what a police officer and a patriot should do. “The SP did what the police should do, what a patriot should do. Those who live in India but abuse it and hail Pakistan have no right to stay here,” the BJP leader said.

Giriraj Singh said Naqvi might not be aware of the entire incident. Several BJP leaders, including Uttar Pradesh Deputy Chief Minister Keshav Prasad Maurya, have defended Superintendent of Police Akhilesh Narayan Singh. BJP vice president Uma Bharti had said that it was natural for the police officer to tell “rioters” to go to Pakistan if they were raising pro-Pakistan slogans.

The police officer had claimed that he had made these remarks, which were caught on video that surfaced last week, when some stone-pelting protesters ran away after raising pro-Pakistan slogans during the agitation against the amended citizenship law. His action, however, drew flak from several quarters as critics argued that a police officer should not make provocative remarks. They argued that no video evidence had emerged to back his claim that some protesters raised “Pakistan zindabad” slogans.