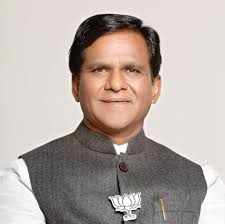 BJP Member of Parliament From Jalna

Be the first one to rate! Submit Review
Facebook Feeds
This message is only visible to admins.
Problem displaying Facebook posts. Backup cache in use.
Click to show error
Error: (#803) Some of the aliases you requested do not exist: ravsahebdanvepatil Type: OAuthException

A New Year and a resolve for new beginnings and progress for the great land of West Bengal!

Interacted with Governors of the states to discuss the COVID-19 situation, vaccination and ways to spread awareness on fighting this pandemic. https://pib.gov.in/PressReleseDetailm.aspx?PRID=1711888

Raosaheb Danve is a Member of Parliament and belongs to the Bharatiya Janata Party. In the year 2019, he was elected as Member of Parliament in 17th Lok Sabha representing Jalna, Maharashtra. Since 1999, he was elected as Member of Parliament in 13th, 14th, 15th and 16th Lok Sabha from Jalna constituency. Also, he was elected as Member of Maharashtra Legislative Assembly from Bhokardan constituency in the years 1990 and 1995, respectively.
Who is Raosaheb Patil Danve?
Raosaheb Patil Danve is BJP's MP from Jalna. He was born in Javakhede and currently lives in Shivaji Nagar, Jalna Road, Bhokardan, Jalna, Maharashtra- 431114. Regarding his education, he is a Graduate and is into Agriculturist.
What is the net worth of Raosaheb Patil Danve?
Raosaheb Patil Danve has assets worth Rs 229,557,992 (Twenty two crore ninty five lakh fifty seven thousand nine hundred & ninty two Rupees) and financial liability of Rs 4,049,590 (Fourty lakh fourty nine thousand five hundred & ninty Rupees).
Is there any criminal case registered against Raosaheb Patil Danve?
Yes, we have found 2 criminal cases registered against Raosaheb Patil Danve as of 2019. There are only few leaders in India who does not have criminal offences or cases registered against them. Choose your neta wisely and vote for nation's bright future!
How to contact Raosaheb Patil Danve?
You can contact him on 09868180280 or can email him on [email protected]. The accuracy of phone number and email details are not verified by ourneta.com.
About Neta
Assets & Liabilities
Details of Criminal Cases
IPC Section 171(B)
FIR No 587/2016, Police Station Paithan, r/w 22(1) Maharashtra Municipality Act 1965.
IPC Section 323, 504, 506
SCC No 1029/2017, 6th First Class Judicial Magistrate, Latur.