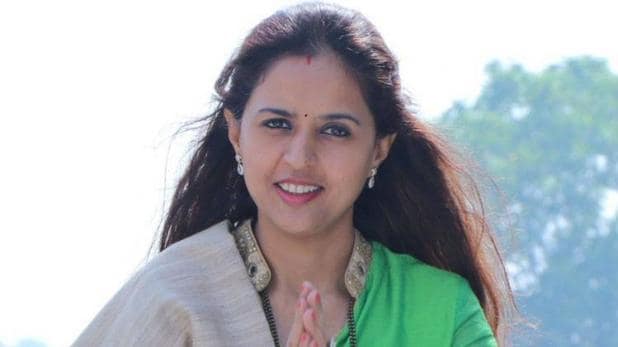 BJP Member of Parliament From Beed

Member of Parliament, Beed (Maharashtra) ◆ Committee on Welfare of OBC's ◆ committee on Health and Family welfare ◆ Vice President Of @BJP4Maharashtra

Pritam Munde is a Member of Parliament and belongs to the Bharatiya Janata Party. In the year of 2014, she was elected as a Member of Parliament in 16th Lok Sabha from Beed constituency through bypoll. She is re-elected as a Member of Parliament in 17th Lok Sabha representing Beed, Maharashtra in the year of 2019. She is the daughter of Gopinath Pandurang Munde, who was the most popular politician of Maharashtra and senior leader of the Bharatiya Janata Party.
Who is Pritam Munde?
Pritam Munde is BJP's MP from Beed . She was born in Beed and currently lives in Nathra, P.O Kauthali, Parli, Beed, Maharashtra. Regarding her education, she is a Post Graduate and is into Medical Practitioner.
What is the net worth of Pritam Munde?
Pritam Munde has assets worth Rs 167,477,926 (Sixteen crore seventy four lakh seventy seven thousand nine hundred & twenty six Rupees) and financial liability of Rs 98,833,794 (Nine crore eighty eight lakh thirty three thousand seven hundred & ninty four Rupees).
Is there any criminal case registered against Pritam Munde?
Yes, we have found 1 criminal cases registered against Pritam Munde as of 2019. There are only few leaders in India who does not have criminal offences or cases registered against them. Choose your neta wisely and vote for nation's bright future!
How to contact Pritam Munde?
You can contact her on 09664633333 or can email her on [email protected]. The accuracy of phone number and email details are not verified by ourneta.com.
About Neta
Assets & Liabilities
Details of Criminal Cases
IPC Section 188
Parali Police Station Parali, Beed, 82, the year 2014, Date 26.09.2014, SSC No 23/2016, JMFC, Parali, Vaijnath, Beed.