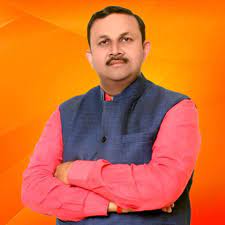 Be the first one to rate! Submit Review
Facebook Feeds
This message is only visible to admins.
Problem displaying Facebook posts. Backup cache in use.
Click to show error
Error: Unsupported get request. Object with ID 'peoplePradeep-Shukla100030271458118' does not exist, cannot be loaded due to missing permissions, or does not support this operation. Please read the Graph API documentation at https://developers.facebook.com/docs/graph-api Type: GraphMethodException
Twitter Feeds

Pradeep Shukla is a 40 years old Indian politician and a member of the 18th Legislative Assembly of Uttar Pradesh, representing Sahajanwa. In the 2022 Assembly elections, Pradeep Shukla of the Bharatiya Janata Party won the Sahajanwa seat by defeating Yashpal Rawat from Samajwadi Party with 43406 votes.

Pradeep Shukla’s total declared assets are Rs 9.3 crore, including Rs 2.7 crore in moveable assets and Rs 6.6 crore as immovable assets. His total reported income is Rs 25.1 lakh, of which Rs 16 lakh is self income. Pradeep Shukla has total liabilities of Rs 1.6 lakh with a nil criminal record.

Who is Pradeep Shukla?
Pradeep Shukla is BJP's MLA from Sahajanwa. He was born in Gorakhpur and currently lives in Deoria Road, Visunpurwa, Mahadev Jharkhandi Tukda No-1, Po. Kurnaghat,Tehsil Sadar, Dist. Gorakhpur, U.P. - 273008. Regarding his education, he is a Graduate and is into Business.
What is the net worth of Pradeep Shukla?
Pradeep Shukla has assets worth Rs 92,741,315 (Nine crore twenty seven lakh fourty one thousand three hundred & fifteen Rupees) and financial liability of Rs 155,104 (One lakh fifty five thousand one hundred & four Rupees).
Is there any criminal case registered against Pradeep Shukla?
No, we have found 0 criminal cases registered against Pradeep Shukla as of 2019. There are only few leaders in India who does not have criminal offences or cases registered against them. Choose your neta wisely and vote for nation's bright future!
How to contact Pradeep Shukla?
You can contact him on 9415258620 or can email him on [email protected]. The accuracy of phone number and email details are not verified by ourneta.com.
About Neta
Assets & Liabilities
Details of Criminal Cases