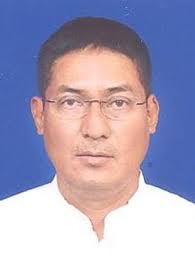 BJP Member of Parliament From Lakhimpur

Be the first one to rate! Submit Review
Facebook Feeds
This message is only visible to admins.
Problem displaying Facebook posts.
Click to show error
Error: (#803) Some of the aliases you requested do not exist: pradanbaruahassam, Type: OAuthException
Twitter Feeds

My dear friend Binod suddenly passed away today. He was still young and very bright. Gone way too soon. My thoughts and prayers are with his family and loved ones. May his soul rest in peace. Om Shanti 🙏🏻

I extend my greetings to everyone on the joyous occasion of Rongali Bihu and Assamese New Year!

May this festive season bring with it immense joy and good luck for everyone.

Pradan Baruah is an Indian politician who is member of Parliament and elected to 16th Lok Sabha from Lakhimpur seat since November 2016. He won the bye-election in November 2016, after the seating member Sarbananda Sonowal resigned from the seat in May 2016 after becoming the Chief Minister of Assam.

Who is Pradan Baruah?
Pradan Baruah is BJP's MP from Lakhimpur. He was born in Amritpur, Silapather, Dhemaji, Assam and currently lives in Ward No. 6, Rup Nagar, Aradhoal, P.O. Dhemaji, Distt. Dhemaji - 787057, Assam. Regarding his education, he is a 12th Pass and is into Social Worker and Farmer.
What is the net worth of Pradan Baruah?
Pradan Baruah has assets worth Rs 14,307,978 (One crore fourty three lakh seven thousand nine hundred & seventy eight Rupees) and financial liability of Rs 5,839,285 (Fifty eight lakh thirty nine thousand two hundred & eighty five Rupees).
Is there any criminal case registered against Pradan Baruah?
No, we have found 0 criminal cases registered against Pradan Baruah as of 2019. There are only few leaders in India who does not have criminal offences or cases registered against them. Choose your neta wisely and vote for nation's bright future!
How to contact Pradan Baruah?
You can contact him on 7002309513 or can email him on [email protected]. The accuracy of phone number and email details are not verified by ourneta.com.
About Neta
Assets & Liabilities
Details of Criminal Cases