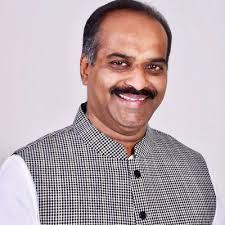 Remembering the great #SriKrishnadevaraya on his Jayanti.

His fascinating legacy continues to hold sway over the public imagination.

An aerial view of the football stadium built 11000 feet above sea level in Spituk, Leh, as part of the #KheloIndia sports infrastructure.

Union Minister Shri @KirenRijiju Ji had laid the foundation for various sports facilities in the state in September last year.

The first dose of vaccine in #Karnataka was administered to Smt Nagaratna, staff of Victoria Hospital at Bangalore Medical College.

We have decided to celebrate January 16 as #NationalStartupDay: PM Shri @narendramodi Ji

Who is PC Mohan?
PC Mohan is BJP's MP from Bangalore Central. He was born in Bangalore and currently lives in 1928, 30th Cross, 12th Main, Near G.K Kalyana Mantapa, Banashankari 2nd Stage, Bengaluru, Karnataka- 560070. Regarding his education, he is a 12th Pass and is into Businessperson & Social Worker.
What is the net worth of PC Mohan?
PC Mohan has assets worth Rs 475,796,999 (Fourty seven crore fifty seven lakh ninty six thousand nine hundred & ninty nine Rupees) and financial liability of Rs 261,111,285 (Twenty six crore eleven lakh eleven thousand two hundred & eighty five Rupees).
Is there any criminal case registered against PC Mohan?
Yes, we have found 2 criminal cases registered against PC Mohan as of 2019. There are only few leaders in India who does not have criminal offences or cases registered against them. Choose your neta wisely and vote for nation's bright future!
How to contact PC Mohan?
You can contact him on 09845003600 or can email him on pc.mohan@sansad.nic.in. The accuracy of phone number and email details are not verified by ourneta.com.
About Neta
Assets & Liabilities
Details of Criminal Cases
IPC Section 171(C)
FIR No 127(A), RP ACT 1951, VII Additional Chief Metropolitan Magistrate (ACMM), CC No 11574/09, Date- 23-05-2009. Await Order Stayed in High Court in CRLPR 896/12, CRL RP 896/12, Before High Court of Karnataka. CC No 11574/09 has stayed.
147 & 174(a) of Railway Act 1989
IV Additional Chief Metropolitan, ACCM, Bangalore Cognizance Taken Date- 06-05-2008, CC No 10614/8.