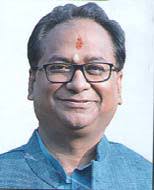 Neeraj Bora is a 54 years old Indian politician and a member of the Uttar Pradesh Legislative Assembly. He is a member of the Bharatiya Janata Party and was elected into the legislative assembly in the 2022 UP elections from the Lucknow North constituency by defeating Pooja Shukla of the Samajwadi Party.

Neeraj Bora is a doctor, teacher, philanthropist, and politician who has rendered his services to society for three decades, now MLA at Lucknow-North. He is also the establisher of Sewa Hospital and the Bora group of Institutions, including the Institute of Allied Health Sciences, Lucknow.

Neeraj Bora’s total declared assets are Rs 9.9 crore, including Rs 3.9 crore in moveable assets and Rs 6 crore as immovable assets. His total reported income is Rs 49.3 lakh, of which Rs 19.6 lakh is self income. Dr. Neeraj Bora has total liabilities of Rs 1.2 crore, and according to the election affidavit filed, 0 criminal cases were registered against him.

Who is Neeraj Bora?
Neeraj Bora is BJP's MLA from Lucknow North. He was born in Lucknow and currently lives in 82-83, Sector D, Priyadarshini Colony, Sitapur Rd, Lucknow, Uttar Pradesh- 226024. Regarding his education, he is a Post Graduate and is into Businessperson.
What is the net worth of Neeraj Bora?
Neeraj Bora has assets worth Rs 98,765,324 (Nine crore eighty seven lakh sixty five thousand three hundred & twenty four Rupees) and financial liability of Rs 11,909,517 (One crore nineteen lakh nine thousand five hundred & seventeen Rupees).
Is there any criminal case registered against Neeraj Bora?
No, we have found 0 criminal cases registered against Neeraj Bora as of 2019. There are only few leaders in India who does not have criminal offences or cases registered against them. Choose your neta wisely and vote for nation's bright future!
How to contact Neeraj Bora?
You can contact him on 09935047000 or can email him on [email protected]. The accuracy of phone number and email details are not verified by ourneta.com.
About Neta
Assets & Liabilities
Details of Criminal Cases