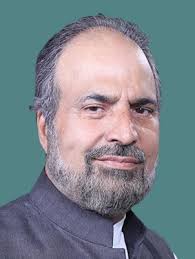 JKPDP Member of Parliament From Baramulla

JK poised for big change: BaigSrinagar, Nov 12: Peoples Democratic Party (PDP) senior leader and Member of Parliament, Muzaffar Hussain Baig has said J&K is poised for a big change not just in government but the system that has been subverted by the present coalition government led by National Conference.Addressing a public meeting in Kangan, he said the NC & Congress rout in the Lok Sabha polls would seal their fate further in the coming assembly elections. He said PDP’s agenda of reconciliation, reconstruction and resolution would be implemented in every part of the state so as to empower every individual resident of Jammu & Kashmir. Baig said the decision of Chief Minister Omar Abdullah to run away from Ganderbal even before the election is the most explicit poster of that party’s acceptance of defeat ahead of the polling.Baig said if the CM and head of the party is on the run how can other candidates hope to withstand the tide of danger against the ruling party triggered by its mis-governance and misconduct. Baig said Omar Abdullah government has made the state almost bankrupt in last six years. To cope up with emergencies like the one prevailing at present when treasuries are unable to honour bills, the J&K Bank would serve the state, but this government by handing over its debt management and overdraft facility to the Reserve Bank of India (RBI) has deprived the state of its last resort, he said. Baig, who represents North Kashmir in the Lok Sabha, expressed concern over the way the ruling government, for its trivial political gains, has subverted the normal employment process by bypassing the established institutions of recruitment in the state- thus marring the merit to benefit its own people,. “It has been the age old policy of the National Conference not to allow the institutions to grow because they fear that they won’t be able to resort to malpractices once the institutions start working transparently,” he said. Bashir Ahmad Mir, candidate for Kangan assembly constituency was also present on the occasion. ...

Airlift boats to save human lives in J&K: Baig to CentreExpresses concern over worsening flood situationUrges for accelerating relief, rescue operationsSeeks army’s assistance to rescue nomads in high pasturesSrinagar, Sept 06: Calling for stepping up rescue operations in the wake of devastating floods in Jammu and Kashmir Senior Peoples Democratic Party (PDP) leader and Member of Parliament, Muzzafar Hussain Baig has said large number of people are faced with danger to life in many parts of the state and the Centre must step in to provide logistical support on war footing.During his tour to various areas of North Kashmir region, Baig said there is an acute shortage of boats and the Union government should airlift them from other parts of the country as the situation is fast deteriorating and could lead to a catastrophic end. He today went again to various areas of his North Kashmir constituency to take stock of the situation caused by the devastating floods. He said many people are marooned and a large number of them are facing threat of floods and starvation even wherever they have been able to reach safe places. Baig said thousands continue to be inundated in their homes without any access to drinking water or eatables. He said the situation clearly is beyond the capacity of the state government which has failed to setup a disaster management response. He said the state has never in the living memory faced such a major disaster and the administration is not able to contribute much.Reiterating his party’s demand for declaring the J&K floods as a ‘National Calamity’ Baig said the government has not been able so-far to move men and machinery in adequate measure to meet the challenge. “It might be too late if a major relief and rescue initiative is delayed any further,” he added.Expressing serious concern over the worsening situation on the ground, Baig said the incessant rains and flood fury has wreaked havoc in the entire North Kashmir causing immense damage to road communication, bridges, buildings, standing crops and other infrastructure. “Devastating floods have also consumed many human lives in the area during last many days,” said Baig.He said the people living in both Kandi and low lying areas are facing the wrath of nature’s fury and with no presence of the government on the ground they have been left to fend for themselves. “The government may be giving an impression that it is ‘tackling’ the situation but on the ground it is no where seen. People have been left on their own mercy and it they who are actually helping each other in this hour of crisis,” the PDP MP said. Baig said areas like whole Gulmarg constituency, Bandipore, Sonawari, Gurez, Kupwara, Handwara, Lolab, Pattan, Baramula, Uri, Langate and Sangrama are the worst hit with almost all villages deluged. He said continuous rains and floods have forced the people to move to safer places and with no help from the administration the crisis has worsened further. He said there is massive damage to infrastructure with most of the areas cut off from rest of the state. He said the people living in the border areas are also facing huge hardships due to floods. “People living in the border areas like Uri are not able to move out as roads have either been washed away or are submerged.” He said the Nand Singh Bridge on Srinagar-Muzzafarabad road in Uri was washed away by the flash floods cutting-off dozens of villages from rest of the Valley. He said the people living in Tanghdar also facing huge problems due to continuous rainfall. Baig said farmers in the entire North Kashmir have suffered heavy losses as incessant rains and floods have damaged the standing crops almost everywhere. Urging for accelerating the rescue and relief measures Baig said there is an emergency like situation prevailing with people complaining about lack of drinking water, ration, kerosene, LPG, power supply, medicines, baby food, boats and sand bags.Baig also expressed deep concern at the plight of the nomadic population that is still in high pastures in the areas like Bandipore, Bangus , Lolab, Gurez with their live stock. “There has to be a greater sensitivity to the condition of the people spread all over the mountainous regions so as to eliminate at least the threat to life and live stock,” he said and added army assistance should be sought in rescuing the nomads and their flocks in the high pastures. ...
View on Facebook
· Share

A Nice Read!! "Omar's downfall started with handling of Shopian case in 2009, the first year of his government, when the bodies of two women were recovered from a water stream in Shopian region. Locals accused government forces of rape and murder. At a press conference in Srinagar, Omar said the two women had drowned, as per preliminary investigation, but at the same time he ordered a probe. People suspected the motives of Omar and questioned his stand on the issue. Hardly had the dust around the Shopian incident settled that India's Central Bureau of Investigations was invited by the state government to probe the matter which rebutted the claim of rape and murder, and instead said the two women had drowned. Omar faced accusations of 'burying' the case to 'save his chair' by the opposition Peoples Democratic Party (PDP) and Hurriyat leaders, an allegation often repeated in his stint as chief minister." ...

The Steep Fall of Omar Abdullah

On a cold November afternoon in 2011, the Unified Command, the top security coordination body, met to review the security situation in Indian-admin
View on Facebook
· Share