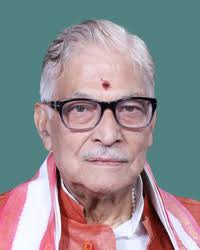 BJP Member of Parliament From Kanpur

Today and everyday respect for our professional army and salute to brave soldiers ready to lay down their lives for the country. #ArmyDay ...
View on Facebook
· Share

Took my first dose of #CovidVaccine at AIIMS New Delhi, it is absolutely safe,
I appeal all eligible people to come forward !

Who is Murli Manohar Joshi?
Murli Manohar Joshi is BJP's MP from Kanpur. He was born in Delhi and currently lives in Aangiras, 9/10 A, Tagore Nagar, Anukul Chandra Banerji Road, Allahabad, Uttar Pradesh- 211001. Regarding his education, he is a Post Graduate and is into Retired Professor .
What is the net worth of Murli Manohar Joshi?
Murli Manohar Joshi has assets worth Rs 78,410,008 (Seven crore eighty four lakh ten thousand eight Rupees) and financial liability of Rs 1 (One Rupees).
Is there any criminal case registered against Murli Manohar Joshi?
Yes, we have found 1 criminal cases registered against Murli Manohar Joshi as of 2019. There are only few leaders in India who does not have criminal offences or cases registered against them. Choose your neta wisely and vote for nation's bright future!
How to contact Murli Manohar Joshi?
You can contact him on (0542) 2222377 or can email him on [email protected]. The accuracy of phone number and email details are not verified by ourneta.com.
About Neta
Assets & Liabilities
Details of Criminal Cases
IPC Section 147, 149, 153A, 153B, 505
198/02, Case No 768/2003, PS. Ram Janam Bhumi, Ayodhya, Dist- Faizabad, UP, Cognizance and Charges frame Court Additional Chief Judicial Magistrate, Raebareily, UP, charges frame date 28-07-2005, Revision Petition No 217/2001, High Court Allahabad (Lucknow) Gave order in the favor of a candidate, Against filed a petition into the Supreme Court S.L.P.