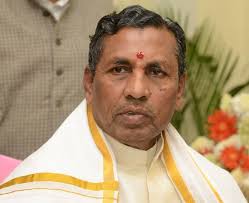 INC Member of Parliament From Kolar

K H Muniyappa is a former Member of Parliament and belongs to the Indian National Congress political party. In the year 2014, he was elected as Member of Parliament in 16th Lok Sabha representing Kolar, Karnataka. Also, he was elected as Member of Parliament in 10th, 11th, 12th, 13th, 14th and 15th Lok Sabha from Kolar constituency in the years 1991, 1996, 1998, 1999, 2004 and 2009, respectively.
Who is K H Muniyappa?
K H Muniyappa is INC's MP from Kolar. He was born in Kambadahally and currently lives in 100/B, 60 Feet Road, Layout, Bhoopasandra Sanjay Nagar, Bengaluru, Karnataka- 560094. Regarding his education, he is a Post Graduate and is into Advocate and Social Worker.
What is the net worth of K H Muniyappa?
K H Muniyappa has assets worth Rs 329,443,821 (Thirty two crore ninty four lakh fourty three thousand eight hundred & twenty one Rupees) and financial liability of Rs 144,227,620 (Fouteen crore fourty two lakh twenty seven thousand six hundred & twenty Rupees).
Is there any criminal case registered against K H Muniyappa?
Yes, we have found 1 criminal cases registered against K H Muniyappa as of 2019. There are only few leaders in India who does not have criminal offences or cases registered against them. Choose your neta wisely and vote for nation's bright future!
How to contact K H Muniyappa?
You can contact him on 09868180808 or can email him on [email protected]. The accuracy of phone number and email details are not verified by ourneta.com.
About Neta
Assets & Liabilities
Details of Criminal Cases
IPC Section 323, 341, 504, 506, 34
FIR No 95/2013, Robert Sanpete Police Station, K.G.F. No 0095/2013, Additional Civil Judge (Sr. Dn) And CJM Court, Kolar District, Section 3CL(1)(2)10 SC/ST Prevention of Atrocities Act 1989.