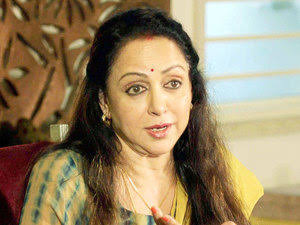 BJP Member of Parliament From Mathura

Artist/performer is who i am.,rest is love from all and blessings of almighty.

Wishing all my dear brothers and sisters all over the world a Very Happy and Blessed Raksha Bandhan. May your lives be filled with love, joy and prosperity always🙏

In Mathura with young school children in celebration of #AazadiKaAmritMahotsav
Interacting with these kids made me realise tht our country’s future is secure in these young hands. They understand the importance of the occasion,pride in being Indian & the greatness of our nation🙏

Who is Hema Malini?
Hema Malini is BJP's MP from Mathura. She was born in Ammankudi and currently lives in 'ADVITIYA', Plot No 17, Jaihind Society, 12th Road, J.V.P.D. Scheme, Juhu, Mumbai, Maharashtra. Regarding her education, she is a Post Graduate and is into Actress, Producer and Politician.
What is the net worth of Hema Malini?
Hema Malini has assets worth Rs 2,508,270,292 (Two fifty crore eighty two lakh seventy thousand two hundred & ninty two Rupees) and financial liability of Rs 131,288,062 (Thirteen crore twelve lakh eighty eight thousand sixty two Rupees).
Is there any criminal case registered against Hema Malini?
No, we have found 0 criminal cases registered against Hema Malini as of 2019. There are only few leaders in India who does not have criminal offences or cases registered against them. Choose your neta wisely and vote for nation's bright future!
How to contact Hema Malini?
You can contact her on 09458335335 or can email her on [email protected]. The accuracy of phone number and email details are not verified by ourneta.com.
About Neta
Assets & Liabilities
Details of Criminal Cases