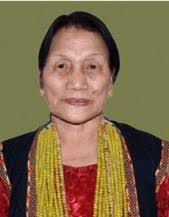 In 1962 she passed Pre-University College at Lady Keane College in Shillong. Afterwards she worked as a school teacher for some time.On October 18, 2013 she was elected unopposed to the Arunachal Pradesh Legislative Assembly as an Indian National Congress candidate in a bye-election in the Dambuk constituency. She is the widow of Jomin Tayeng, who had been elected to the Dambuk seat in the 2009 election.Gum Tayeng was fielded as the Congress candidate in Dambuk in the 2014 Legislative Assembly election. She was one of only six women in the state to stand as candidate.

Who is Gum Tayeng?
Gum Tayeng is BJP's MLA from Dambuk. She was born in Dambuk and currently lives in Village Rayeng Po Ps Roing Dist Lower Dibang Valiey Arunachal Pradesh. Regarding her education, she is a 12th Pass and is into House Wife MLA.
What is the net worth of Gum Tayeng?
Gum Tayeng has assets worth Rs 45,724,097 (Four crore fifty seven lakh twenty four thousand ninty seven Rupees) and financial liability of Rs 1 (One Rupees).
Is there any criminal case registered against Gum Tayeng?
No, we have found 0 criminal cases registered against Gum Tayeng as of 2019. There are only few leaders in India who does not have criminal offences or cases registered against them. Choose your neta wisely and vote for nation's bright future!
How to contact Gum Tayeng?
You can contact her on 9436048320 or can email her on dampukm[email protected]. The accuracy of phone number and email details are not verified by ourneta.com.
About Neta
Assets & Liabilities
Details of Criminal Cases