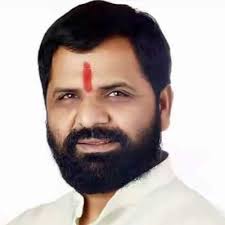 Bharat Gogawale is 57 years old MLA contested election from Mahad, Maharashtra in the year 2019 and he won. Nowadays, he is associated with the Shivsena political party. Also, he was elected as Member of Maharashtra Legislative Assembly representing Mahad constituency in the years 2009 and 2014, respectively. He has one criminal record and 21,97,910 Rupees financial liability. Bharat Gogawale is also known as Bharatsheth Gogawale.