New Delhi: Will the saffron map shrink further? In perhaps another jolt to the BJP after it lost the Maharashtra assembly elections, the party could lose Jharkhand next, if exit polls are to be believed.

Last time round in 2014, the BJP had won 37 seats and ally All Jharkhand Students Union (AJSU) had won five, together getting the majority. In 2014, the JMM’s tally stood at 19, the Congress’s six and the Babulal Marandi-led Jharkhand Vikas Morcha won eight constituencies. Six of the Jharkhand Vikas Morcha’s eight MLAs later switched to the BJP. The 2014 House also had six others.

But this time, exit polls are telling a very different story. The India Today-Axis My India exit poll says the JMM-Congress may get between 38 and 50 seats, while the BJP could end up with 22 to 32 seats.

The ABP News-IANS-C Voter predicts the JMM-Congress combine will get 35 seats, while the BJP will get 32; smaller parties will win 14 seats.

Kashish News says the JMM-Congress can win anywhere between 37 and 49 seats, while the BJP could get between 25 and 30 seats.
All three exit polls show the Babulal Marandi-led Jharkhand Vikas Morcha emerging as the main gainer along with the Sudesh Mahto-led AJSU. 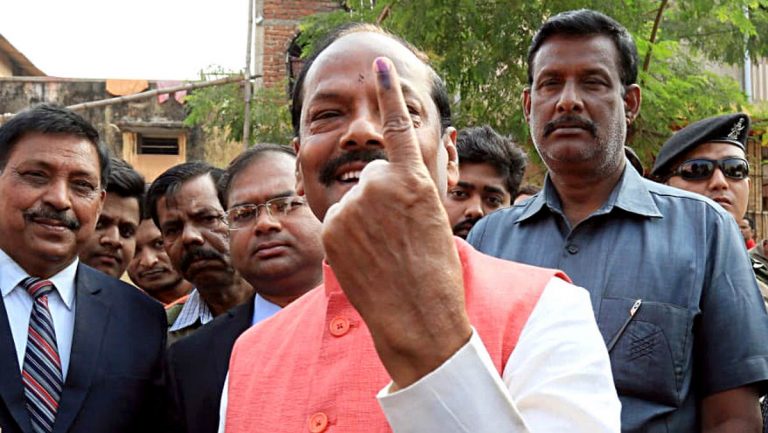 On his way out? Jharkhand’s incumbent CM Raghubar Das after casting his vote in Jamshedpur. Photo credit: ANI

According to the India Today-Axis My India exit poll, for 48 per cent of the electorate, development dominated the voting decision. Anti-incumbency sentiments also played a role, with 30 per cent seeking change. Thirty-six per cent of the respondents appreciated the BJP’s performance at the Centre led by Prime Minister Narendra Modi.

Chief Minister Raghubar Das dismissed the exit polls, saying he was confident he would win a second term. He said voters were happy with his government. JMM leader Hemant Soren said the electorate was unhappy with the policy decisions of the BJP government.
Elections in Jharkhand were held in five phases starting November 30. The results will be declared on December 23.
In what seems to be becoming a trend, national issues, not locals ones dominated the political campaigns and speeches in the run-up to the elections in Jharkhand.

Star campaigners of the BJP like Prime Minister Narendra Modi and Home Minister Amit Shah spoke of Pakistan harbouring terrorists, infiltrators entering India, the Ram Mandir and how the Congress should give citizenship to Pakistani nationals. The Opposition has talked of how they are trying to protect the Constitution in the face of the ‘onslaught’ from the BJP. But not a word from them on local issues.

The only ones who raised local issues to some extent were independent candidates who have no role in national politics. For that reason alone, some of them may spring a surprise on the national heavyweights and there may well be a hung assembly where the independents may have considerable clout. If that happens it would be a lesson to the national parties that dwelling on national and international issues and achievements doesn’t always pay dividends.