This is not the first time when Imran Khan has brought the topic of war quoting the changes in internal laws on India. After Article 370 surfaced, Khan tried his best to condemn India on the world stage.

Despite India’s clear message that the matter was entirely an internal affair to the country, Khan deemed, “It is time for the world to take notice of the situation in Kashmir.”

We strongly condemn Indian Lok Sabha citizenship legislation which violates all norms of int human rights law & bilateral agreements with Pak. It is part of the RSS “Hindu Rashtra” design of expansionism propagated by the fascist Modi Govt. https://t.co/XkRdBiSp3G

He also remarked in the global forum, “We know from our past experience that prevention is better than cure. If the world acts right now and puts pressure on the Indian government to stop this illegal activity, we could prevent this crisis,”

Pakistan has time again used the global platform to send threats to India. His message clearly reads that in case India provokes Pakistan, it won’t hesitate while using its nuclear weapons. 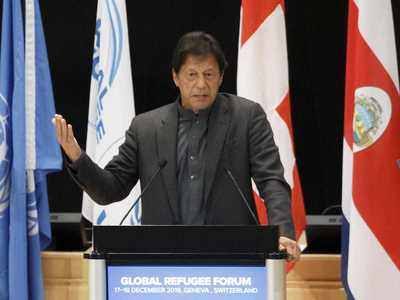 During the September UN General Assembly meeting which took place in New York, Khan warned about the consequences of a nuclear war that was ignited between India and Pakistan to show his disagreement against the decision of revoking the special status of Jammu and Kashmir.

Imran Khan Told UN, “If a conventional war starts between the two countries, anything could happen. A country seven times smaller than its neighbor, what will it do: either surrender or fight for its freedom.”

He also added, “My belief is we will fight and when a nuclear-armed country fights till the end it will consequence far beyond the borders. I am warning you. It’s not a threat but the worry about where are we heading to. If this goes wrong, you hope for the best but prepare for the worst.”

Pakistan has left no stone unturned when it comes to finding a reason for criticizing India on the global platform. Article 370 was one among many instances and now it’s the CAA law. Khan without caring about the constant danger faced by the minorities in Kashmir kept challenging India against Article 370.

At the same time, the United Nations, along with other international communities have never retracted when condemning the extra-judicial killings and planned disappearances of minorities by the Pakistani establishment.

As per the MEA statement released, Imran Khan quoted, “Over the past 72 years, Pakistan has systematically persecuted its minorities, forcing most of them to flee to India. PM Khan wishes world forgets what his Army did in ’71 to people of erstwhile East Pakistan. Pakistan must act to protect and promote the rights of its own minorities and co-religionists.”

In response to the promise made by Imran Khan, the Indian External Affairs Ministry spokesperson. Raveesh Kumar reverted, “Khan had earlier also peddled familiar falsehoods to advance his narrow political agenda by making such gratuitous and unwarranted remarks.”

New Delhi has once again warned Pakistan by rejecting a resolution which was adopted by Pakistan against the Citizenship (Amendment) Act. Adding to the action, the message read that the move directly accounts for internal affairs of the country challenging the Islamic state wanting to peddle its narrative to Kashmir.

The Citizenship Amendment Bill was passed from Parliament which became an Act after Presidential assent to it on November 12.

Islamabad in a statement highlighted the role of Global Refugee Forum (GRF) calling it the first-ever forum in Geneva working for its exemplary role for the protection of refugees from various countries which includes Pakistan.