New Delhi: After the brutal mob attack on Sunday night, Police have filed a case against Aishe Gosh, a left-wing student leader along with the other 19 for vandalizing a server room on the Jawaharlal Nehru University (JNU) campus just before the attack, on Saturday. However, there have been no arrests made for the Sunday’s attack where many students and teachers got injured. 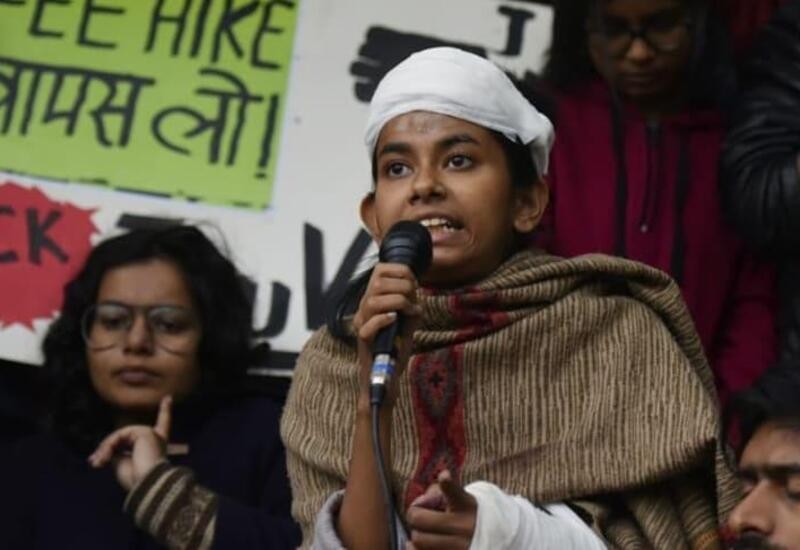 Aishe Ghosh who is the JNU Students Union President was also attacked by masked assailants when the incident took place on Sunday night. However, as per the first FIR information issued by the Delhi police on Tuesday, her name appeared in the report.

During the attack, Aishe Ghosh was one among the other 31 students who were injured when 50 masked people raided the New Delhi-based university. The mob attacked students and teachers using sticks, iron rods, and sledgehammer as well as also vandalized the property of the university.

Kavita Krishnan, a left-wing leader, and JNU alumnus, pertaining to the FIR called the case registered against Gosh as “outrageous”.

Kavita said, “Aishe herself has been a victim of the murderous act and you are filing an FIR against the victim, whereas in the presence of Delhi police a whole hoard of assailants armed to the deep, walked out of the campus, battered on the back the police and they didn’t arrest anyone.”

Even the teachers were shocked after the FIR first information came out. The JNU Teachers Association has questioned the FIR logic and seek an explanation for the same.

Surajit Mazumdar who is the secretary of JNU Teachers Association exclaimed, “It seems to be very clear that they want to escape from responsibilities on what has happened during the mob violence.”

He further added, “I can’t see any other purpose behind his. I don’t understand on what basis and evidence are they, otherwise, filing an FIR against the JNU Students’ president who was badly injured.”

The news conference that took place on Monday quoted Ghosh remark which blamed the Akhil Bharatiya Vidyarthi Parishad (ABVP) for the violence that happened in the university. This further has played the part in triggering nationwide protests.

ABVP is a student group which is affiliated to the Rashtriya Swayamsevak Sangh (RSS). And, RSS connects to the governing party, Bharatiya Janata Party (BJP), hence making her stand clear.

Ghosh told the indianexpress.com website, “It was an organized attack. They were singling out people and attacking. There is a clear nexus of JNU administration, security police, and the ABVP vandals. They did not intervene to stop the violence.”

Witnesses present during the attack also blamed ABVP members earlier for the attack. However, the charges have been denied by the right-wing student. On the contrary, the RSS-affiliated group has put the blame on left-wing leaders for causing such a panic attack.

On Monday, the scores of riot police patrolled the university. Although the Police have made no immediate arrests, they have blamed the violence on “rival student groups”. Also, the Police filed a case on Monday against unidentified people charging them for rioting and damaging property.

The various human rights groups have also come forward to make their stand. Human Rights Watch (HRW) has accused the incompetence of the Police in protecting the JNU students in a statement that was made the next day of the riot.

There were videos also shared on social media that showed how the police did not handle the situation well and allowed the assailants to leave the campus.

Meenakshi Ganguly, HRW South Asia director, told, “Students and teachers begged the police to intervene during the attack at Jawaharlal Nehru University, but the police simply stood and watched the attackers walk away.”

The accusations against Police do not seem to cease. After accusing them of the brutality against students at Jamia Millia Islamia University while the protests after the citizenship law passed in December, this time they have been called irresponsible.

Meenakshi Ganguly further added, “All too often police in India use excessive force and arbitrarily arrest peaceful critics of the government, but are derelict in their duty to maintain law and order when violent ruling party supporters are involved.”

As of now, Police have released no further comments.

The anger against attacks was demonstrated across the country including cities of Bengaluru, Kolkata, Mumbai and other major cities.

However, the BJP has denied the claims made by the opposition party and on the other hand, has blamed the left-leaning student groups themselves which dominate the JNU politics.

The government has also promised to look closely into the matter. At the same time, Home Minister Amit Shah told university administrators alongside police to maintain peace and order at the campus.