New Delhi: As the country burns with protests over the Citizenship Amendment Act, the Congress party has decided to hold a ‘satyagrah’ at Rajghat on Monday from 3 pm.

Top party leaders, including former Congress president Rahul Gandhi and its general secretary Priyanka Gandhi Vadra, are expected to be present at the silent protest.

Congress general secretary K C Venugopal announced, ‘Senior Congress leaders will undertake a satyagraha at Mahatma Gandhi’s Samadhi at Rajghat, on December 23 from 3 pm to 8 pm. In line with the path of non-violence, yet consistent and unequivocal opposition shown by the Father of the Nation, the party’s satyagraha will fight against this dictatorial government and to protect Baba Saheb’s sacred Constitution.’

The decision to hold the protest was taken at a meeting of top party leaders at Sonia Gandhi’s residence on Saturday evening. Initially, the protest was planned for Sunday, but they did not get permission for it, so the event was postponed till Monday.

Announcing the protest, KC Venugopal also said, ‘The dictatorial and stubborn BJP government at the Centre and in different states has used indiscriminate police force against ordinary citizens in the name of maintaining law and order.’

‘The Congress is committed to upholding the principles enshrined in the Constitution and fight for the continuation, maintenance and safeguard of the rights of all, as enshrined and guaranteed by our founding fathers,’ he added.

On Friday, interim party president Sonia Gandhi had upbraided the Narendra Modi government for using ‘brute force’ against peaceful protesters. In a televised message, she said that people have the right to raise their voice against the ‘wrong decisions and policies’ of the government, and register their concerns. ‘The Congress party assures the people of India that it is fully committed to stand up and defend their fundamental rights and uphold the foundational values of our Constitution,’ she said.

On Saturday, Janata Dal-United Vice President and election strategist Prashant Kishor had taken a dig at the Congress leaders for not participating in the protest over CAA & NRC. The Congress has been criticized for its non-participation in the countrywide protests. A day after the violent protest at the Jamia Millia Islamia, former Congress chief Rahul Gandhi had left for South Korea on an official tour.

However, in his absence, Congress general secretary Priyanka Gandhi Vadra had joined the protest over the police brutality against students at India Gate on Tuesday and then again on Friday evening, soon after protests in old Delhi’s Daryaganj area turned violent and Bhim Army chief Chandrashekhar Azad was sent to judicial custody. 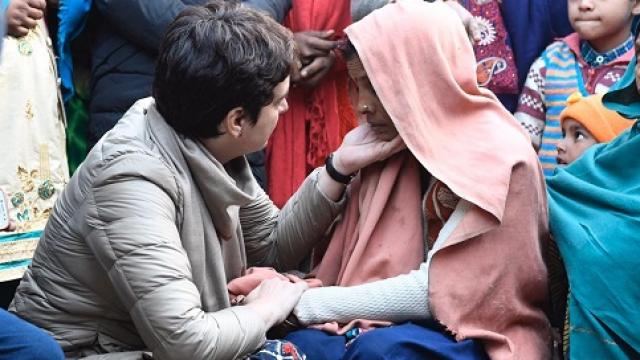 On Sunday Priyanka Gandhi Vadra visited Bijnor in Uttar Pradesh and met the families of two people who were killed in violence over the Citizenship Amendment Act. She visited the Nahtaur area of the district to meet the bereaved families. She also spoke to other people in the area.

Bijnor was one of the districts in Uttar Pradesh severely affected by violence in the anti-CAA protests, when protesters threw stones at policemen and set fire to vehicles.