India-US have gone from strength to strength, PM Modi tells Trump in a new year’s message

PM Modi highlighted the significant progress made in deepening the strategic partnership between the two countries in the previous year and expressed his desire to continue to work with President Trump for enhancing cooperation in all areas of mutual interest, the statement said.

President Trump wished the people of India prosperity and progress in the New Year. He expressed satisfaction at the achievements in the relationship in the last few years and reiterated his readiness for further deepening bilateral cooperation, according to the PMO statement. 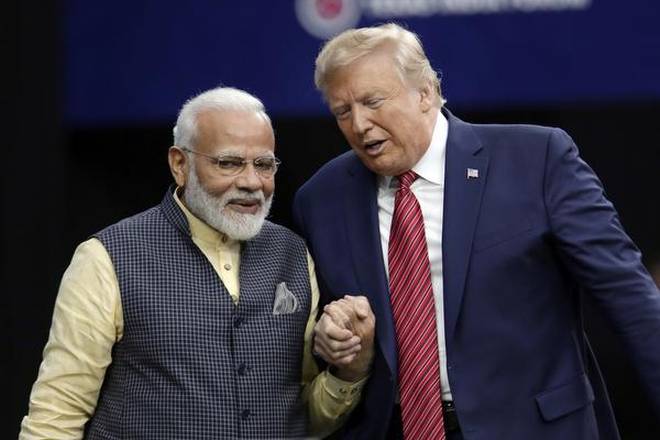 India and Pakistan have gone from strength to strength, PM said in a news year’s call to Trump. Photo credit: The Hindu

In Washington, the White House released a readout of the telephonic conversation between the two leaders. “Today, President Donald J Trump spoke with Prime Minister Narendra Modi of India to exchange New Year’s greetings,” the White House said. “The leaders discussed ways to further strengthen the United States-India strategic partnership in 2020, and they also reviewed the regional security matters.”

The strengthening of the strategic partnership was reflected in the India-US Joint Statement issued after their second 2+2 dialogue towards the end of the year, which was the key highlight of 2019.

The two countries signed a key agreement to facilitate the transfer of defence technology during the second 2+2 meeting in December in Washington, which was attended by their foreign and defence ministers.

In 2019, India placed orders worth billions of dollars of state-of-the-art military equipment from the US, started the new tri-services exercise ‘Tiger Triumph’, which will now be an annual affair, signed one more foundational agreement and accelerated the pace of the Defense Technology and Trade Initiative.

The call from PM Modi comes at a time India and the United States are close to concluding a trade package that would provide enhanced market access to both countries.

India’s outgoing Ambassador to the U.S., Harsh Vardhan Shringla said it would pave the way for a bigger bilateral trade deal between the two largest democracies of the world, which will only benefit the companies of the two countries. He however did not mention a date for the inking of the deal. Noting that there are a lot of complementarities between the Indian and the U.S. economy, the Ambassador said that Indian-American entrepreneurs in strengthening these bilateral ties, not only people to people but also economic and strategic relationship.

The trade deal was first announced by U.S. President Donald Trump when he met Prime Minister Narendra Modi in New York in September on the sidelines of the UN General Assembly. Trump on September 24 said his country will soon have a trade deal with India to boost economic ties between the two nations.