Chants of ‘Azadi’ and Faiz’s iconic poem ‘Hum Dekhenge’ were shouted and sung respectively at Delhi’s reputed and revered St. Stephens College. In the video that went viral after their march, students are seen starting their march after reading our Preamble of the Indian constitution.

Maitrayi, a 3rd-year student of BST says, “The space at Stephens is very elite an inaccessible. Meaning, we know that not every class of people can make it to this space. So, in a way, today this protest against CAA, NPR and this fascist government which revoked 370 in Kashmir and what not! This is a protest against all these amendments brought by the government. Because it was a strike’s call so everyone had boycotted the class and then we started the march by saying the Preamble out loud.”

Violence was unleashed at the campus of the great Jawaharlal Nehru University on 5th January. Masked and armed goons entered the campus and began assaulting students of this university. This violence resulted in injury to teachers and students and a total of 30 individuals were injured in the mob attack. 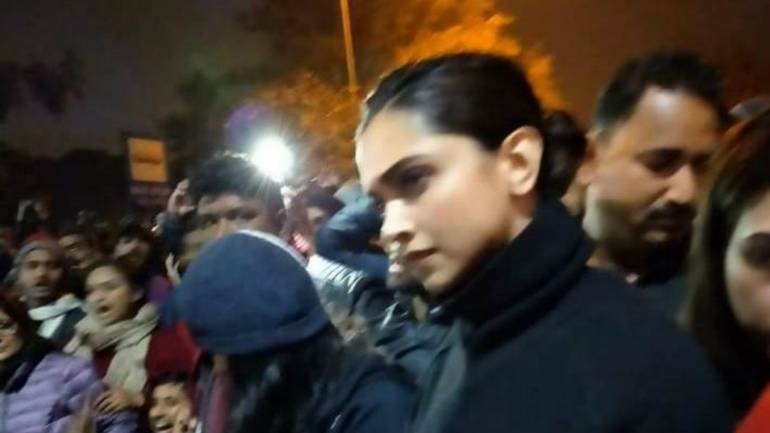 Tuesday, a day after the incident, Deepika Padukone visited the university and surprised or perhaps shocked many leaders and people of the country. Vishal Bharadwaj, Anurag Kashyap, Anubhav Sinha, Zoya Akhtar, Richa Chadha, Swara Bhaskar, Tapsee Pannu, Rahul Bose, Dia Mirza, Swanand Kirkire, Sudhir Mishra, Hansal Mehta, Rekha Bharadwaj, and many other Bollywood celebrities, while protesting on Carter Road and Gateway of India, Mumbai had openly condemned other Bollywood celebrities for not speaking up openly about the issue. What was interesting to note was that “#Boycott Chhapaak,” was as equally trending as ”#ISupportDeepika” was.

Deepika Padukone, the actress who faced death threats for her outspoken behavior during the release of Padmaavat, did not back up to show her face for empathizing with the protestors of NRC, NPR, and CAA who were assaulted at JNU on the 5th of January.

Laxmi, on whose life incident Deepika’s character in Chhappak (directed by Meghna Gulzar) is filmed is an acid victim and was attacked by a man called Nadeem Khan in Khan Market, Delhi, in 2005. After the support shown by Deepika Padukone towards the survivors of the assaulted on 5th January, many Bollywood celebrities who were all adulators of the government for the past five years have started to speak about it.

Former president of student’s union, current council member of the Communist Party of India, Kanhaiya Kumar was already present and motivating people with the slogans,” milkar bolo, Jay Bhim, Jay Bhim (speak up together, Jay Bhim, Jay Bhim)” when Deepika Padukone reached the university campus. Aishe Ghosh, the current Student Union President of JNU who got hurt during the mob attack on Sunday, was also supported by Deepika Padukone. However, Deepika is being trolled for sharing stage with Kanhaiya Kumar.

This is very disgusting thing that my favorite actress, whom I respect most is doing strange things, she is sharing stage with terrorist #KanhaiyaKumar who’s slogans were “भारत ततेरे टुकड़े होंगे”

Its beyond comprehension that #DeepikaPadukone is sharing space with #KanhaiyaKumar who was penalised for sexual misconduct & flashing his d*ck to a woman at JNU;
While portraying the role of an acid victim & her fight against such predators#TukdeTukdeGang #BoycottChhapaak pic.twitter.com/IYjThBQa2p

It is noteworthy how the people of India, to oppose the Citizenship Amendment Act, are finding unique ways to protest. Whilst the students at prestigious universities of the country are leading the protests, they are backed up by intellectuals and art promoters all across the country.